Alexander Calder (b. 1898, Lawnton, Pennsylvania–d. 1976, New York City), whose illustrious career spanned much of the twentieth century, is the most acclaimed and influential sculptor of our time. Born in a family of celebrated, though more classically trained artists, Calder utilized his innovative genius to profoundly change the course of modern art. He began in the 1920s by developing a new method of sculpting: by bending and twisting wire, he essentially “drew” three-dimensional figures in space. He is renowned for the invention of the mobile, whose suspended, abstract elements move and balance in changing harmony. From the 1950s onward, Calder increasingly devoted himself to making outdoor sculpture on a grand scale from bolted steel plate. Today, these stately titans grace public plazas in cities throughout the world.

22 July or August 1898
Calder is born in Lawnton, Pennsylvania, to Nanette Lederer Calder, a painter, and Alexander Stirling Calder, a sculptor. I always thought I was born—at least my mother always told me so—on August 22, 1898. But my grandfather Milne’s birthday was on August 23, so there might have been a little confusion. In 1942, when I wrote the Philadelphia City Hall for a birth certificate, I sent them a dollar and they told me I was born on the twenty-second of July, 1898. So I sent them another dollar and told them, “Look again.” They corroborated the first statement.

December 1909
For Christmas, Calder presents his parents with a dog and a duck that he trimmed from a brass sheet and bent into formation. The duck is kinetic, rocking back and forth when tapped.

October–December 1923
Calder begins classes at the Art Students League of New York, studying life and pictorial composition with John Sloan and portrait painting with George Luks. He studies at the League through December 1925.

Winter 1925
Calder makes hundreds of brush drawings of animals at the Bronx Zoo and the Central Park Zoo. The following year, Animal Sketching, a drawing manual written by Calder with reproductions of 141 of his brush drawings, is published by Bridgman Publishers in New York.

Fall 1926
Calder begins creating Cirque Calder, a complex and unique body of art. Fashioned from wire, fabric, leather, rubber, cork, and other materials, Cirque Calder is designed to be performed for an audience by Calder. It develops into a multi-act articulated series of mechanized sculpture in miniature scale, a distillation of the natural circus. Calder is able to travel with his easily transportable circus and hold performances on both continents. Over the next five years, Calder continues to develop and expand this work of performance art to fill five large suitcases.

October 1930
Accompanied by another American artist, William “Binks” Einstein, Calder visits Mondrian’s studio at 26 rue du Départ. Already familiar with Mondrian’s geometric abstractions, Calder is deeply impressed by the studio environment. It was a very exciting room. Light came in from the left and from the right, and on the solid wall between the windows there were experimental stunts with colored rectangles of cardboard tacked on. Even the victrola, which had been some muddy color, was painted red. I suggested to Mondrian that perhaps it would be fun to make these rectangles oscillate. And he, with a very serious countenance, said: “No, it is not necessary, my painting is already very fast.” This one visit gave me a shock that started things. Though I had heard the word “modern” before, I did not consciously know or feel the term “abstract.” So now, at thirty-two, I wanted to paint and work in the abstract. And for two weeks or so, I painted very modest abstractions. At the end of this, I reverted to plastic work which was still abstract.

27 April–9 May 1931
Calder’s abstract work is presented for the first time in the exhibition “Alexandre Calder: Volumes–Vecteurs–Densités/Dessins–Portraits,” at Galerie Percier, Paris.

Fall 1931
Marcel Duchamp visits the studio at 14 rue de la Colonie again and sees Calder’s latest works. There was one motor-driven thing, with three elements. The thing had just been painted and was not quite dry yet. Marcel said, “Do you mind?” When he put his hands on it, the object seemed to please him, so he arranged for me to show in Marie Cuttoli’s Galerie Vignon, close to the Madeleine. I asked him what sort of a name I could give these things and he at once produced “Mobile.” In addition to something that moves, in French it also means motive. Duchamp also suggested that on my invitation card I make a drawing of the motor-driven object and print: CALDER/SES MOBILES.

After 12 February 1932
In response to Duchamp’s term “mobile,” Arp asks sarcastically, Well, what were those things you did last year [for Percier’s]—stabiles? Calder adopts “stabile” to refer to his static works.

August 1933
The Calders visit a real-estate agency in Danbury, Connecticut. After viewing several properties, they discover a dilapidated eighteenth-century farmhouse in Roxbury, Connecticut; both Louisa and Calder claim to have been the first to exclaim, “That’s it!”

May 1937
Calder and Miró visit the Spanish pavilion under construction at the 1937 World’s Fair site in Paris. Calder meets the pavilion’s architects, Josép Lluís Sert and Luis Lacasa. Sert eventually commissions Calder to make Mercury Fountain for the Spanish pavilion. Mined in Almadén in Spain, the mercury symbolizes Republican resistance to fascism.

3–25 December 1940
“Calder Jewelry” is presented at Willard Gallery, New York. In her press release for the show, Willard writes, These works of art are savage and deliberate and self-confidently sophisticated . . . This is a master modern artist’s contribution to the history of fashion. For a world already in chains it is superb stuff.

29 September 1943–16 January 1944
The Museum of Modern Art, New York, presents “Alexander Calder: Sculptures and Constructions,” curated by Sweeney and Duchamp. Calder writes, Simplicity of equipment and an adventurous spirit in attacking the unfamiliar or unknown are apt to result in a primitive and vigorous art. Somehow the primitive is usually much stronger than art in which technique and flourish abound. Originally scheduled to close on 28 November 1943, the exhibition is extended to 16 January 1944 due to public demand.

Before 3 July 1945
Calder produces a series of small-scale works, many from scraps trimmed during the making of other objects. Let’s mail these little objects to [Louis] Carré, in Paris, and have a show, Duchamp suggests when he sees them; by taking advantage of the newly available international airmail system, Duchamp’s action predates “mail art” by nearly two decades. Carré responds to Duchamp’s proposal. Interested show Calder miniatures would also gladly exhibit mobile sculptures available all sizes and colours.

14–19 June 1952
Calder represents the United States in the XXVI Biennale di Venezia. Sweeney installs the exhibition and writes a short text for the exhibition catalogue. Calder wins the Grand Prize for sculpture.

28 June 1952
Calder accepts the commission from Carlos Raúl Villanueva, whom he met through Sert in 1951, to design an acoustic ceiling for Aula Magna, the auditorium of the Universidad Central de Venezuela. He collaborates with the engineering firm Bolt, Beranek, and Newman, Cambridge, Massachusetts.

11 November 1953
The Calders visit Jean to see his renovated mill house in Saché. Calder agrees to a trade of three mobiles for François Premier, a dilapidated seventeenth-century stone house built adjoining a cliff on Jean’s property.

15 March 1957
The Committee of Art Advisors at UNESCO approves Calder’s maquette for a standing mobile. Titled Spirale, the mobile top is made by Calder at Segré’s Iron Works in Connecticut and the stabile bottom is made with the collaboration of Jean Prouvé in France.

27 March 1962
In a letter to Giovanni Carandente, Calder agrees to a proposal to make a sculpture for the Spoleto Festival in Italy. He decides to make “a stabile, which will stand on the ground, + arch the roadway.” His work results in Teodelapio, a monumental stabile, which is completed in August 1962.

14 June 1969
Calder attends the dedication ceremony for La Grande vitesse, a monumental stabile commissioned by the city of Grand Rapids, Michigan, in August 1967. This is the first sculpture to be funded by the public art program of the National Endowment for the Arts (NEA).

14 October 1976–6 February 1977
The Whitney Museum of American Art, New York, with Jean Lipman as curator, exhibits “Calder’s Universe,” a major retrospective. The exhibition travels to fifteen cities throughout the United States and Japan.

11 November 1976
Calder dies in New York City at the home of his daughter Mary.

For a comprehensive list of exhibitions and publications, see www.calder.org

2021
Alexander Calder: Modern from the Start, The Museum of Modern Art, New York, US

1970
A Salute to Alexander Calder, The Museum of Modern Art, New York, US

1935
Mobiles by Alexander Calder, The Renaissance Society at The University of Chicago, Illinois, US

1927
The Galleries of Jacques Seligmann and Company, Paris, France

1993
Picasso and the Age of Iron, Solomon R. Guggenheim Museum, New York, US

1968
The Machine as Seen at the End of the Mechanical Age, The Museum of Modern Art, New York, US

1964
Elected to American Academy of Arts and Letters

1961
Fine Arts Gold Medal for Master of Sculpture, The American Institute of Architects

1960
Elected to National Institute of Arts and Letters
Gold Medal of Honor in Sculpture, Architectural League of New York

Alexander Calder, Subject of a Major Retrospective at the Neue Nationalgalerie, Berlin, Germany

Works by Alexander Calder on View at the High Museum of Art, Atlanta, Georgia 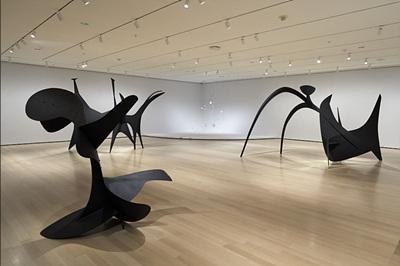 Alexander Calder, Subject of a Major Solo Retrospective at the Museum of Modern Art, New York