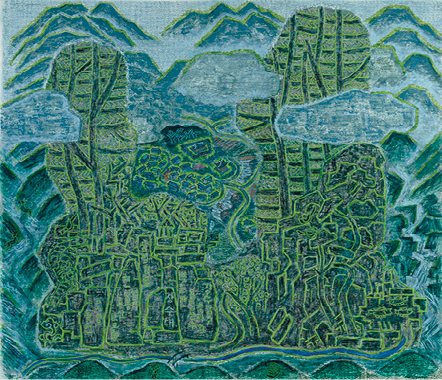 Kukje Gallery is pleased to announce a solo exhibition of work by Min Joung-Ki on view from January 29 to March 3, 2019. As the artist’s first presentation with Kukje Gallery, the exhibition will consist of 14 new paintings with an additional 21 earlier works, together representing a comprehensive overview of his forty-year practice that has explored how perspective shapes landscape.

Min is best known for his style of reinterpreting the everyday landscape in a manner that emphasizes its realism and sociopolitical history. While he has focused mainly on geographic features and human traces left on nature, including mountains and water, this exhibition indicates a shift towards urban environments and architecture. In particular, the exhibition will showcase a new group of works that recompose buildings and historic sites around Seoul. This interest is inspired in part by Seoul’s long history; it has been the capital city since the Joseon Dynasty (founded in 1392) and each painting explores some aspect of the city’s history. Specific locations addressed in the new works include well-known sites such as Jongno-gu’s Cheonggye Stream, Sajikdan, Segeomjeong, and Baeksasil Valley. Min also painted urban landscapes in the 1980s, but while his works at that time were mainly composed of arbitrary symbols of urbanism, his Seoul landscapes today are much more complex and specific. These new compositions present labyrinths of engineered spaces and reflect a greater focus on research and social history, interpreted through multiple points of view and competing perspectives.

Born in 1949, Min Joung-Ki gained recognition in the early 1980s with what the artist refers to as his “barbershop paintings.” These paintings affectionately appropriated the unsophisticated, kitschy paintings that frequently adorned barbershops around Korea. In this way, Min consciously employed an anti-aesthetic in order to challenge the conventional values at the time that were supported by official institutions such as Kukjeon (Korean National Art Exhibitions). Min’s “barbershop paintings” were created using oil paint, which at the time was considered an elitist medium. In using oil paint to render these everyday genre paintings, Min was able to foreground his critique of elite tropes of art. In so doing, he championed a genre of the everyday as a tool through which to communicate sentiments and truths that the public could sympathize with.

It is for such reasons that individuality, independence, and placeness were accentuated as significant traits of Min’s work. In particular, Min achieves independence of his art by not merely representing the object but by activating the painting as a means of communication between the past and the present. The artist’s unique style of appropriating traditional Oriental paintings and ancient maps also stems from this interest in engaging with the past. This approach allows Min to avoid nostalgia; instead, he is able to “portray the landscape of today through the remnants of the past.”

Min Joung-Ki accentuates placeness in his paintings, engaging each location’s historicity and capturing each of their geological and geographical features. Since moving his studio in 1987 from Seoul to Yangpyeong, Gyeonggi Province, the artist has concentrated more on mountains and the traces of people who settled in them, often titling the works after the names of specific places, thereby capturing this interest in place and anchoring the paintings in history. As he begins to explore a broader array of subjects such as roads and now architecture, this strategy has remained an essential part of the artist’s practice.

For Min, this approach to painting is based on what he refers to as yinyeon, or a sense of inevitability that leads him to his subjects. It is the roads he has actually walked on, and thus remembers, that he portrays through his diagrammatic paintings. Likewise, he believes that using oil paint and the grammar of Western painting, along with the format of ancient maps, landscapes, and folding screens, are fitting methods for conveying his interest in the intersection of place and time.

In At Leisure in Mongyudowon (2016), Min juxtaposes a contemporary image of Buam-dong with that of the early Joseon period painter An Gyeon’s Dream Journey to the Peach Blossom Land (1447). The painting presents the dramatic contrast between the town’s historic topography captured in historic paintings and its profound transformation today. Sooip-ri (Yangpyeong) (2016) reinterprets the traditional bird’s-eye view and perspective of Oriental paintings as it portrays the present status of the region’s mountains and rivers in the manner of folk paintings. Composed of three and six separate canvases respectively, View of Sajikdan at a Distance (2019) and Inwangsan (2019) borrow the format of folding screens in an attempt to overcome the inconvenience of painting on a single large screen. Such is an effective method that allows the artist to balance the sites’ geography, history, and narrative all in one frame, via a format familiar with the public.

Visualizing history and investing his paintings with temporality, Min’s work generates a unique synchronicity, wherein the various perspectives and time frames coexist in a single pictorial plane. In these compositions, each of his planes are composed of a specific complementary tone, either green or yellow, enhancing the two-dimensionality of the frame. Inside these two-dimensional planes, however, diverse spatial and temporal layers of the past are deconstructed and recombined through the appropriation of modern buildings and signage—thereby forming an organic link and disregarding any one particular perspective.

One example of this is the major new work Cheongpung Valley 1-2 (2019). In this painting, Min­ juxtaposes a contemporary view of various housing structures, built on artificially remodeled land, along with the 2,000m2 compound built by Yoon Deok-Young on the side of Inwang Mountain. Designed by Yoon, a bureaucrat of the Great Korean Empire (1897-1910), in an ostentatious French style, the building caught fire and was destructed in the 1970s. Min used extensive research and field trips to reconstruct the temporality of the site, depicting it from two different perspectives. Another new work, titled Park Taewon’s Scenes from Cheonggye Stream 1-3 (2019), is founded on the writer Park Taewon’s novel Scenes from Cheonggye Stream and its description of the transformations around this important body of water that runs through the heart of Seoul. This methodology of painting, aptly referred to as synchronicity, successfully establishes an alternative for constructing rich and unending narratives in contrast to the more linear dichotomous perception of time as seen predominantly in the West.


About the Artist
Min Joung-Ki (b. 1949) studied Western painting and graduated with a BFA from the Department of Painting in the College of Fine Arts, Seoul National University, in 1972. As a member of the “Reality and Utterance Group,” Min’s work responds to the changing social conditions in Korea and their manifestations in urban landscapes and popular culture­. In 1987, after moving from Seoul to Yangpyeong, Gyeonggi Province, he began to explore the history of human livelihoods centered on the mountains. Unlike many other artists of his generation who graduated from Seoul National University, Min refused to participate­ in state-funded National Art Exhibitions, and instead became a founding member of the “Reality and Utterance Group.” This movement rejected the so-called “fine arts” and strove to eliminate the gap between tradition and modernism by endowing contemporary art with “the mundane.” After a series of group exhibitions in the 1970s and 1980s including the Exhibitions of December, Exhibitions of the Third Group and Reality and Utterance Group Members’ Exhibitions, Min held his first solo exhibition in 1983 at the Seoul Art Center, followed by solo exhibitions at major Korean institutions such as the Marronnier Art Center (now Arko Art Center) (2004), Chosunilbo Museum of Art (2007), and Kumho Museum of Art (2016). Major group exhibitions include Ilmin Museum of Art (1999), Seoul Museum of History (2013), the 8th SeMA Biennale (2014), Gyeonggi Museum of Modern Art (2016), and Insa Art Center (2016). In 2006, he was awarded the 18th Lee Joong-Sup Award.