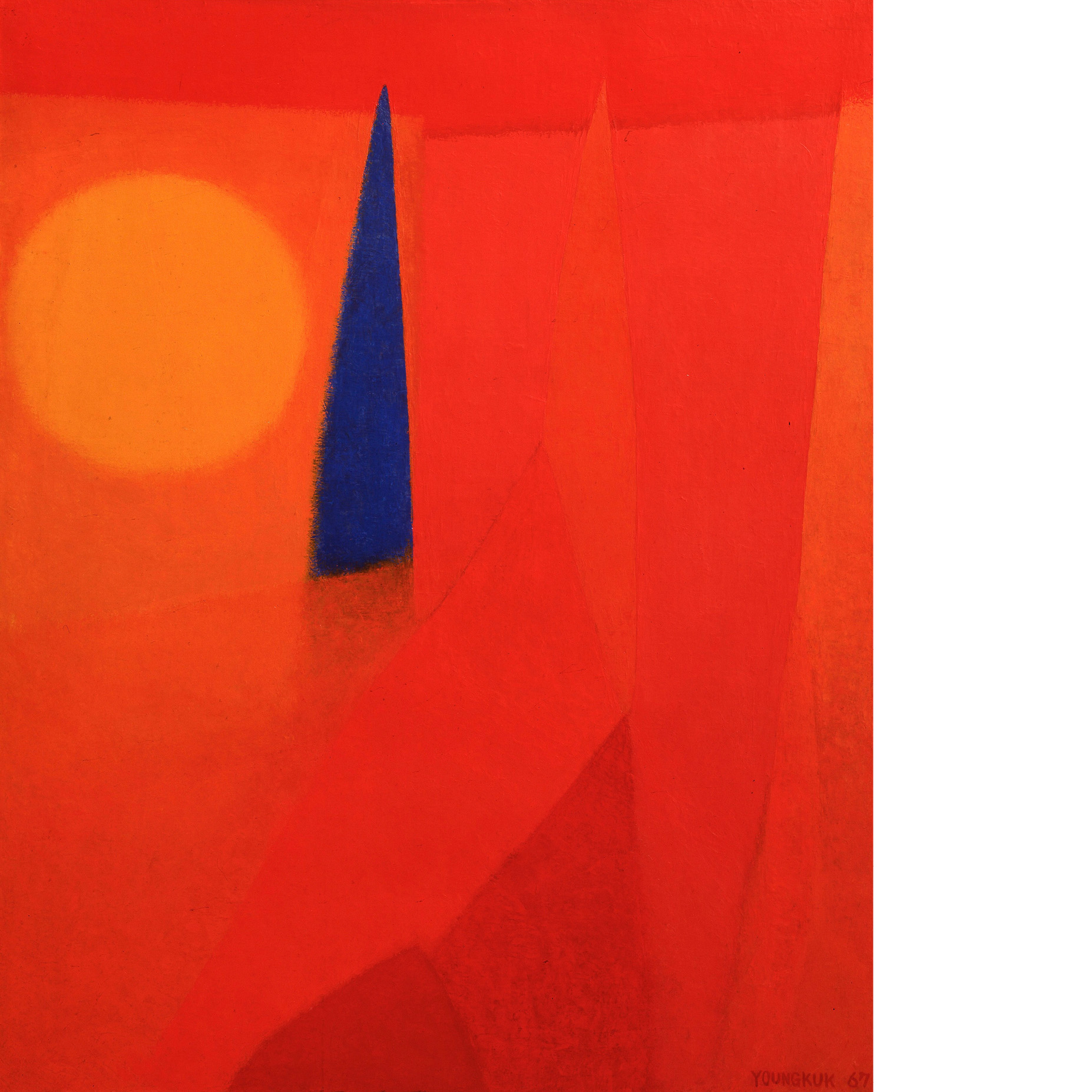 "There is everything in a mountain. Triangle of the peak, curves of the ridges, cross sections of perspectives, multifarious colors...”
– Yoo Youngkuk

Kukje Gallery is pleased to present Colors of Yoo Youngkuk, the 20th memorial exhibition of the pioneering Korean abstract painter Yoo Youngkuk from June 9 to August 21, installed across all three of the gallery’s spaces (K1, K2, K3) in Seoul. Commemorating the 20th anniversary of Yoo’s death, this is the artist’s second exhibition with Kukje Gallery following Colors from Nature in 2018 and surveys his entire artistic oeuvre, with an emphasis on Yoo’s lasting legacy of abstract and formal experimentation. Highlighting multiple stages of the artist’s career, the exhibition is comprised of 68 paintings that present iconic examples from each period of his life; in addition, it will include 21 drawings and archives of ephemera documenting Yoo’s artistic activities, including photographs taken by the artist in 1942 that underscore his interest in photography to develop new abstract methods and vocabularies.

Yoo Youngkuk was born in Uljin-gun (present-day North Gyeongsang-do) in 1916, amidst the turbulence of modern and contemporary Korean history, and first encountered abstract art when he was admitted into the Tokyo Institute of Culture (Tokyo Bunka Gakuen), the cultural center of Imperial Japan. There, he quickly discovered and acquainted himself with some of the most current avant-garde art movements of the 20th century—namely surrealism and abstraction—becoming deeply involved with Japanese abstract artists. These included Masanari Murai and Saburo Hasegawa, who were at the forefront of the avant-garde scene, as well as avant-garde groups including the Association of Free Artists, the Independent Art Association, and the Neo Beaux-Arts Group. As Imperial Japan aggressively propagated the Greater East Asia Co-Prosperity Sphere at the outbreak of the Asia-Pacific War in 1941, reinforcing the empire’s military policies and actively suppressing avant-garde groups, Yoo Youngkuk did not cease to hone his craft, embarking on a series of collage works featuring stone statues of the seated Buddha in Korea’s Gyeongju Namsan. While contemplating a new artistic technique as well as ways to broaden his means of expression, Yoo entered the Oriental Photographer’s School where he developed a new formal vocabulary through the use of photography, establishing a unique language of natural abstraction centering on basic formal elements of dot, line, plane, shape, and color. Yoo returned to his hometown of Uljin-gun in 1943 during the height of the Asia-Pacific War. From then on through the liberation from Japanese colonial rule and the Korean War, Yoo became the breadwinner for his family by working as a fisherman and managing a distillery. Even during this time, Yoo maintained his studio practice in his spare time and led several Korean avant-garde art groups such as the Neo Realism Group (Sinsasilpa, 1948), Modern Art Association (1957), Contemporary Artists exhibit (1958), and New Figures Group (Sin Sang-hoe, 1962).

In 1964, at the age of forty-eight, Yoo ceased his group activities and affiliations entirely, devoting his time and attention solely to his studio practice as a full-time artist. The vast body of drawings and large-scale abstract paintings completed during this period, depicting Yoo’s signature mountain motif, capture the innermost depths of his mind and keen perception of landscape. Noteworthy for their profound level of focus and energy, and an even stronger and more incisive command of composition and style, the profusion of these new works suggests that the artist was struggling to make up for his last twenty years which he referred to as “the lost period.” After his first solo exhibition in 1964, Yoo Youngkuk began to broaden his artistic oeuvre with meticulously calculated compositions and colors, adopting a process wherein he gradually applied colors one atop another to create thick layers. During this period, Yoo’s craft shifted conspicuously from amorphous abstraction to a focus on geometry, along with a more diversified palette including ultramarine, green, purple, and black based on the three primary colors of red, blue, and yellow. Like the afterimage of an intense color lingering even after closing one’s eyes, the lasting moments evoked by Yoo Youngkuk’s colors of emergence elicit both the tension and harmony of complementary colors, as well as the depth and synesthesia caused by subtle variation. Through this masterful use of color, Yoo's works from this period achieve a kind of aesthetic zenith, as defined by his desire for the absolute. For Yoo, this pursuit reflected his philosophical commitment to the idea of life as a full-time artist, an ideal he associated with pursuing an abstinent life, a persistent will and consistent formal experimentation, the pursuit of aesthetic catharsis, and the path he himself took as an explorer, endlessly contemplating the basic elements of form in order to delve into the origin and essence of the abstract.

Colors of Yoo Youngkuk commemorates the 20th anniversary of the artist’s death by surveying his art historical legacy, highlighting works that display the essence of the artist’s distilled formal aesthetic with his signature motifs of mountains and nature that are portrayed with vibrant primary colors and meticulously calculated geometric compositions. Kukje Gallery’s K1 space centers on the artist’s representative and early works, highlighting Yoo’s unique artistic perspective. Facing the streets of Samcheong-dong through its corner windows, the first of the two galleries in K1 showcases works that provide a concise overview of Yoo’s experimentation with color and formal language. The second gallery space focuses on works from the 1950s and early to mid-1960s, in which the artist transformed natural elements into abstract shapes and emphasized simple forms and the texture of oil paint (matière) as he began to establish his unique aesthetic and style with his use of color and distinctive approach to abstract composition.

The K2 space is composed of works painted from the 1970s to the 1990s—the mid- to later period of Yoo’s career when he was a full-time painter. The artist’s exploration of basic formal elements—the dot, line, side, shape, and color—reached maturity during this period, and his works evolved into abstract, almost sculptural, compositions that transform color fields into imagery through his command of a diverse palette and rigorous approach to composition. These works highlight the powerful and primal voice that emanates a narrative and balanced energy. The second floor of the K2 space includes the artist’s series of Gyeongju photographs taken in 1942, as well as multiple drawings and an archive of the artist’s activities that provide a timeline of Yoo’s ceaseless experimentation and commitment to building a unique formal language. This collection of ephemera is shown alongside the artist’s paintings that portray his unique natural abstractions that are largely based on these earlier activities. Many of these peaceful and lyrical paintings, created towards the end of the artist’s struggle with illness, during which Yoo was teetering on the brink of death and used a cardiac pacemaker, shed light on his remarkable life; like an afterimage, they serve as a metaphor for a perfect equilibrium.

The K3 space showcases works produced from the mid- to late 1960s and early 1970s, during which time the artist focused solely on his practice and avoided participation in any artistic groups or associations. Yoo’s restrained emotions and emergent commitment to a purely formal compositional approach are embodied by the surface of his paintings, magnifying the nonrepresentational forms of nature with line, plane, and color, with special attention to green, blue, and ultramarine.

Colors of Yoo Youngkuk strives to provide a panoramic view of the artist’s practice, defined by his experimentation with color and the evolution of his geometric abstractions, as well as his endless meditation on the meaning of an artist’s life. Having lived through the Japanese occupation, liberation, the Korean War, the Cold War, and the anti-communist period, Yoo was able to continuously free himself from the shackles of reality. The exhibition explores the full spectrum of Yoo Youngkuk’s abstract art, acknowledging his stature as one of the pioneers of Korean modernism, and exploring how Yoo’s groundbreaking artistic practice and creative methods enable us to see nature within us. Through his focus on landscapes and abstraction the artist profoundly fused nature and the heart, and to this day Yoo Youngkuk's work reminds us of how to see the landscape without seeing it.


About the Artist
Born in 1916 in Uljin-gun, Gangwon-do (present-day North Gyeongsang-do), Yoo Youngkuk graduated from the Art Department at Bunka Gakuin University, Tokyo, in 1938. He was a professor in the Department of Applied Arts at Seoul National University from 1948 to 1950, and College of Fine Arts at Hongik University from 1966 to 1970 and served as the head judge of Western painting for and was on the committee of the National Art Exhibition of Korea. Yoo’s major solo exhibitions include the 100th Anniversary of Korean Modern Master: Yoo Youngkuk 1916-2002 at the National Museum of Modern and Contemporary Art (hereafter the MMCA), Deoksugung, Seoul (2016), Invitational Exhibition of Yoo Youngkuk at the MMCA, Deoksugung, Seoul (1979), and solo exhibition at the Special Gallery of the Press Center (1964). He has also been widely exhibited in group exhibitions worldwide, such as the Invitational Exhibition of Salon de Mai at Musée d'Art Moderne de la Ville de Paris (1978), 9th Tokyo Biennial (1967), 7th São Paulo Biennial (1963), and exhibitions of the Association of Free Artists in Tokyo (1937-1942). Yoo received the third class (“Bogwan”) of the Order of Cultural Merit in 1984, and the highest award from the Association of Free Artists in the group’s second exhibition (1938). His works can be found in the collections of major museums such as the MMCA, Korea; Seoul Museum of Art; Leeum Museum of Art; and Gyeonggi Museum of Modern Art. Yoo Youngkuk passed away in 2002.