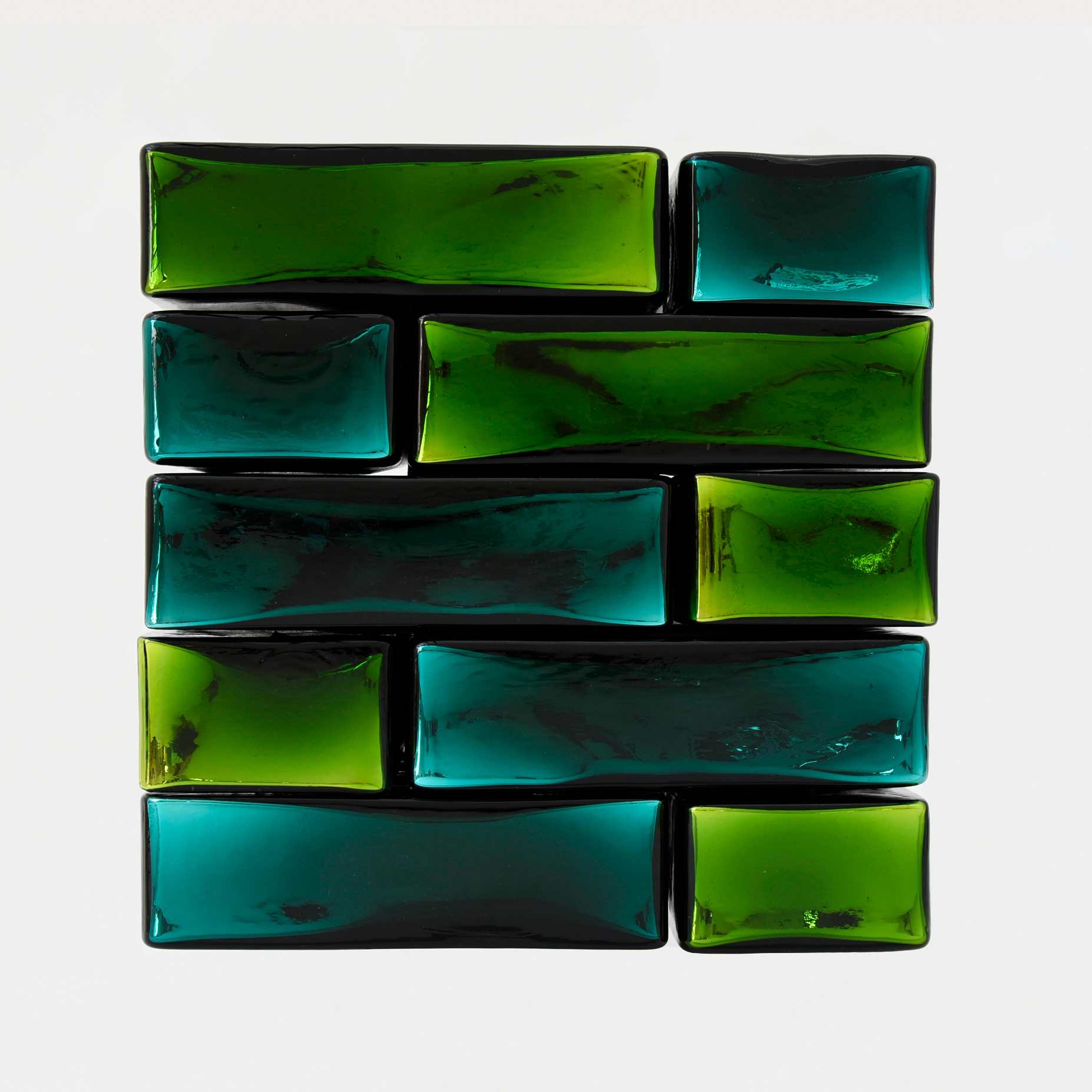 Kukje Gallery is pleased to announce NEW WORKS, a solo exhibition of the French contemporary artist Jean-Michel Othoniel, on view from December 17, 2020, through January 31, 2021. Following Othoniel’s first solo show at Kukje Gallery in 2016, this exhibition will be his second with the gallery and also his first held in the newly renovated K1 building. NEW WORKS will be installed across the two exhibition spaces on the ground floor of the building and will include glass sculptures, lithographs of watercolor drawings, and paintings which mark a new milestone in Othoniel’s artistic practice. All of these new works were created during the lockdown caused by Covid-19. The exhibition not only presents a “new” and emboldening body of work during this period of distress, but also embodies the artist’s commitment to aesthetic contemplation and the immutable beauty that remains even during our current chaos.

Jean-Michel Othoniel’s varied artistic vocabulary takes inspiration from spiritual practices and religious traditions rooted in different cultures and generations, as well as from his own personal experiences. Employing “transformable” materials such as glass, sulfur, and wax, the artist deftly uses a wide range of techniques and experiments that can implement “acts of intervention,” where materials evolve and change in form through the application of external forces such as fire and air. Additionally, Othoniel has expanded the boundaries of his practice by collaborating with skilled craftsmen based in Italy, Japan, India, and Mexico.

Facing the streets of Samcheong-dong through its corner windows, the first of the two galleries in K1 showcases new works from the ongoing series Precious Stonewall. Created in dialogue with Indian glass artisans, the title of the series borrows from the historic Stonewall Riot (1969), when the LGBT community stood up against police violence and discrimination in New York City. The new major body of sculptures is a result of Othoniel’s latest research into glass—material the artist most identifies with—and his first attempt at this level of architectural scale. On a journey to Firozabad, India, in 2010, the artist was deeply impressed by local craftsmen working with glass under sweltering heat, which prompted the artist to learn traditional glassmaking techniques of India and together design a new unit of composition: a glass brick. The artist was also struck by the Indian custom of piling bricks prior to building a house, a gesture he repeatedly witnessed throughout the duration of his travels in India. Contemplating the meaning of this distinctive serial form, the artist adopted the construction unit of brick as a formal element of his artistic vocabulary. For Othoniel, the brick is one of the most rudimentary and universal elements shared by all humanity, and symbolizes the primitive yet essential desire for “living.” By reinterpreting the brick into the fragile material of glass, Othoniel brings attention to the innately paradoxical character of the material, as being both solid and precious. For NEW WORKS, Othoniel presents a new version of Precious Stonewall using two distinctive colors. Shown alongside this work in the center of the exhibition space is Stairs to Paradise, which is constructed with blue glass bricks forming a set of stairs. The ethereal work captures the human desire to reach heaven or paradise, framing how the humble modular unit of the brick has led the artist to go beyond sculpture, morphing into an architectural installation that transforms the gallery space.

The passage that connects the first and second exhibition spaces showcases a series of lithographs made from original watercolors that correspond to Precious Stonewall. Recalling the glass paintings produced by the twentieth-century German artist Josef Albers during his years as a teacher at the Bauhaus, the lithographs illustrate Othoniel’s shared passion for color, one of the basic elements of art. A simple composition of two colors—translucent and dark blue, yellow and emerald green, blue and gray, and so on—serves as a frame for the viewer to experience Othoniel’s unique way of seeing the world of abstraction beyond a mere representation of sculptural works.

Featured in the second gallery space is a series of sculptures and paintings depicting roses. The rose is a flower which has long played a key role in Othoniel’s practice and symbolizes his great admiration for nature, often reappearing in his work. As a testament to how the flower has served as an important theme in Othoniel’s artistic vocabulary, the exhibition will feature six pieces from his La rose du Louvre paintings, four new rose paintings, and four rose sculptures. La rose du Louvre paintings are exceptionally meaningful to the artist as they were recently made part of the permanent collection of the Louvre Museum after having been produced as commissioned works for the thirtieth anniversary of the I. M. Pei-designed glass pyramid in 2019. Othoniel has a long relationship with the iconic museum, and after an extensive study of their vast collection, he discovered a rose in Rubens’ The Wedding by Proxy of Marie de Medici to King Henry IV. This form was then transformed into an abstracted version of the rose and painted in black ink on a field of white gold leaf. Also shown are rose sculptures that further epitomize Othoniel’s interest in flowers. Three rose sculptures from the series of Rose of the Louvre, sharing a similar formality with the artist’s earlier mirrored glass sculptures, are coated in pink, highlighting the vitality embedded in the iconic blossom. The black rose, on the other hand, is colored with a dense black matte, thereby creating a powerful tension between the two symbolic flowers.

This highly symbolic exhibition will provide an opportunity to explore how “transformation” and “metamorphosis” serve as central elements in the artist’s practice and how particular materials play a poetic role in his vocabulary. By transforming the everyday, universal unit of bricks into the luxurious material of glass, Othoniel highlights the contrast between strength and fragility. Further, Othoniel transforms the original quality of nature contained in his dynamic roses by explicitly playing with the internal and external, mirroring, and light and dark. His expansive artistic experimentation allows the viewer to contemplate timeless and passionate beauty, and invites the audience to immerse themselves in the artist’s uniquely wondrous and symbolic world.


About the Artist
Born in 1964 in St. Étienne, France, Jean-Michel Othoniel now lives and works in Paris. From 1985, before graduating from the École Nationale Supérieure d’Arts, Cergy-Pontoise in 1989, he actively exhibited sculptures, installations, and media works. Othoniel received international recognition after his participation in dOCUMENTA IX (1992) in Kassel, Germany, where the artist showcased his groundbreaking sulfur sculpture. In 2000, Othoniel received his first public commission to transform the Parisian subway station Palais-Royal – Musée du Louvre in celebration of its hundredth anniversary, for which he installed Le Kiosque des Noctambules, made of Murano glass and aluminum. In 2015, the Palace of Versailles welcomed the artist’s Les Belles Danses as the first permanent installation inside its gardens. In 2019, Othoniel was commissioned to create La rose du Louvre by the Louvre Museum, and the original paintings remain permanently in the collection and in situ. 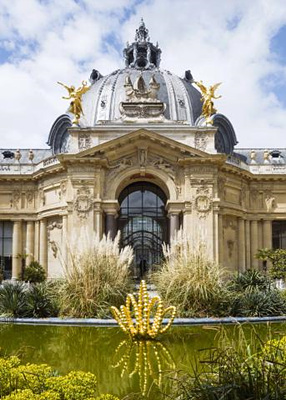 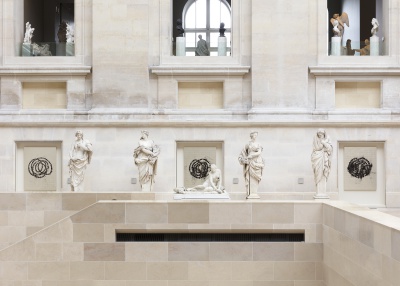 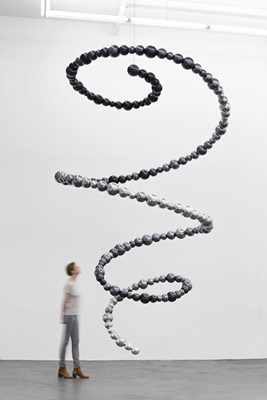 Jean-Michel Othoniel, Subject of Solo Exhibition Motion-Emotion at the Montreal Museum of Fine Arts in Canada 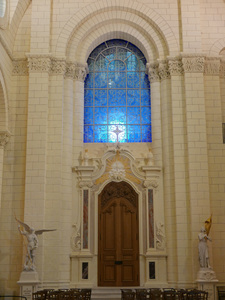 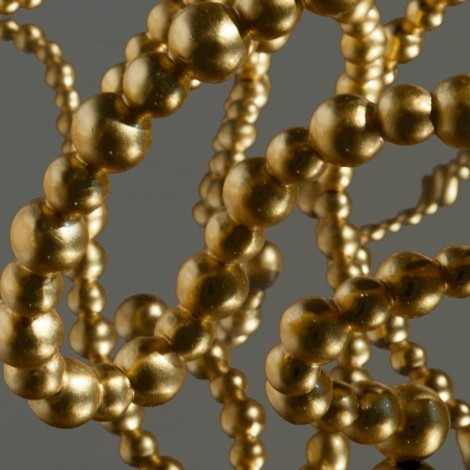 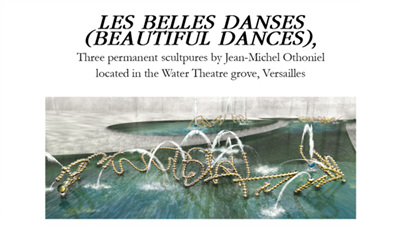 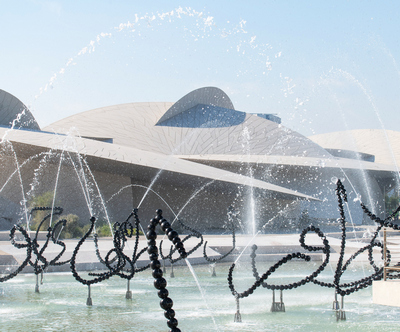