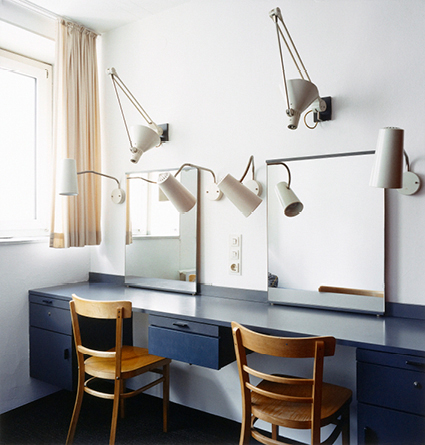 Kukje Gallery is pleased to announce Spaces of Enlightenment, a solo exhibition of the internationally celebrated artist Candida Höfer, on view from July 26 through August 26, 2018. Installed in Kukje Gallery’s K2 space, the exhibition will mark Höfer’s fourth show at the gallery and will include works reflecting her ongoing interest in people and spaces. The selected works in the show, ranging from the late 1990s to the present, focus on unique architectural interiors located in major private and public institutions around the world including theaters, opera houses, libraries, and museums.

The interiors featured in her photographs include a diverse range of periods and geographies, but each share a common historical function as places designed to assist in “enlightenment.” Primarily known as an intellectual and philosophical movement in Europe during the eighteenth century, the “Enlightenment” was defined by its focus on learning, scientific observation and the pursuit of reason. The ideals of the enlightenment, which have profoundly impacted all aspects of modern society including politics, literature, architecture, and art, begin with this emphasis on human reasoning. More broadly, the concept of “enlightenment” can be understood in a religious context: i.e., Buddhism’s concept of “sudden enlightenment” as well as the symbol of an actual light source often depicted in Christian iconography. What links these references is the idea that a state of enlightenment, or “awakening,” is achieved not only through the accumulation of knowledge but also by a change in perception. It is within this context that Höfer engages her subject, presenting these social spaces as places that facilitate human reasoning and intellectual advancement.

The first floor of the K2 space showcases works that capture the interior spaces of theaters and opera houses in Germany, Italy, Portugal, and Argentina. Beginning with the iconic Düsseldorfer Schauspielhaus, Höfer’s images allow the audience to read into the specific architectural characteristics, along with their historical context. This can be seen in the Teatro di Villa Aldrovandi Mazzacorati, Bologna, a private theater built on the land of an aristocratic family as well as in the Teatro Olimpico Vicenza, a building in which tricks of perspective were used to create an illusion of greater space. Another of Höfer’s subjects, the Teatro Comunale di Bologna, was one of the first municipal theaters in Italy inaugurated with public funds. The theater as a shared venue highlights a series of historical developments leading to the establishment and use of public spaces, marking the expansion of spectatorship with the rise of the middle class during the Age of Enlightenment. These social changes then led to the establishment of civic institutions and the popularization of the kind of performance arts that were previously limited to the aristocracy. Looking closely at Höfer’s images, we can read these transformations in the architectural designs, interpreting changes as reflecting shifts in class structure. For example, the box seats originally designed for the nobility and the parterre section (today known as the “stalls”) designed for the middle class, evolved to include the introduction of seats in the latter and ultimately to the elimination of such strict hierarchical separation in public.

The second floor of the K2 space introduces the interior spaces found in libraries and museums, places focused on the pursuit of learning and aesthetics. Höfer pays particular attention to the Baroque libraries housed in monasteries from the Middle Ages, the National Library of France (Bibliothèque nationale de France), a small bookshelf situated in the hallway of the Kunstakademie Düsseldorf, Villa Borghese, the State Hermitage Museum, and the Julia Stoschek Collection; all of these spaces embody each of their evolving function over time. Together with the collection of books, objects, artworks, wall paintings, and furniture, these sites have cultivated their social and historical status, for which they are recognized today. Since their founding, these spaces have been transformed from being reserved only for the privileged to opening their doors to a democratic public. It is in these locations that untold numbers of artists, historians, and philosophers interacted with the public, bringing about changes in cognition and understanding, inspiring creativity and the subsequent birth of great art. Candida Höfer channels this complex accumulation of cultural and artistic influences, capturing the dynamic energies that remain embedded in their spaces.

The spaces in Candida Höfer’s photography quietly hint at how human presence remains embedded in a space, even when unoccupied. In the series most often classified as her early works, including Liverpool (1968), Höfer chronicles the many faces of the city; in Flipper (1973), she captures spaces with pinball machines throughout Europe. The photographic series Turks in Germany and Turks in Turkey, developed throughout the late 1970s, portray Turkish communities in Germany and Turkey respectively, framing the artist’s foundational interest in the physical and social interactions between spaces and human beings. Beginning in the 1980s, Höfer turned her attention towards “public spaces” such as zoos, art and natural history museums, and libraries, documenting the locations and consequence of human cultural activities. The artist captures these organic relationships between spaces and people, subjects and geographical, spatial environments in her viewfinder. The gradual absence of people in her images came naturally during this process, as the artist came to believe that since a space inherently functions with the aid of people, it is unnecessary to prove its existence by including people in the photographs.

The majority of Candida Höfer’s early works were photographed with a 35mm (compact; handheld) camera, with the exception of when her professor Bernd Becher at the Kunstakademie Düsseldorf recommended a large plate camera. In the late 1990s, Höfer’s transition to using a tripod, a 6x6cm and subsequently a 9x12cm format eventually made large-scale prints possible, further highlighting the pristine structural arrangements and spatial organization captured in her work. This transition allows her audience to slowly absorb the minute details that pervade the space in each image, and recognize that many, if not all, of these distinct components of each venue not only act as distinct man-made symbols, but also as elements that constitute the social space.

Candida Höfer works solely with the natural light and artificial illumination that suffuse each venue within a given time period—refraining from using any additional lighting equipment. The artist peruses each location and establishes her point of view before taking her images; what follows is a careful process of editing and the selection of multiple prints prior to settling on a final product. Each title bears the name of the location, institution, and year of the shoot, and the order of production in Roman numerals should multiple photographs be produced from the same venue. Keeping her interference during the process to a minimum, Höfer places margins between the image and frame, effectively constructing a divide between the space of the viewer and the space that exists behind the glass while simultaneously connecting the two spaces. Such artistic decisions induce her audiences to encounter a portrait of space that is imbued with the vestiges of people, time, and history.


About the Artist
Candida Höfer was born in 1944 in Eberswalde, Germany, a town situated northeast of Berlin. Having expressed interest in photography during childhood, Höfer first began her career at the age of nineteen as an apprentice at a photography atelier that dealt with advertisements, architecture, and fashion. She entered the Kölner Werkschulen (Cologne Academy of Fine and Applied Arts) in 1964 and studied art and photography, and worked as a freelance photographer upon graduation. She later attended the Kunstakademie Düsseldorf, one of the most influential European educational institutions at the time in 1973, where she initially studied film under Ole John. In 1976 she was accepted into Bernd Becher’s first photography class, studying alongside contemporaries Axel Hütte (1976 – 1981), Thomas Struth (1976 –1980), Thomas Ruff (1978 – 1985), Tata Ronkholz (1978 – 1985), Petra Wunderlich (1985 – 1988), and Andreas Gursky (1981 – 1987)—later collectively referred to as the first generation of the “Becher class.” Having already been the subject of gallery exhibitions in the late 1970s, Candida Höfer has spent decades expanding and redefining the boundaries of her practice. She not only photographs the interior spaces of public venues, but also conducts serial projects with specific subjects such as On Kawara’s Date Paintings and the twelve casts of Auguste Rodin’s The Burghers of Calais, documenting how they are placed in their respective collections, along with photographing the interiors and exteriors of the architectural feats of Herzog & de Meuron.

Widely exhibited around the world through innumerable solo and group exhibitions, Candida Höfer’s works have been shown at documenta11 (2002) in Kassel, Germany, as well as having represented Germany alongside Martin Kippenberger at the national pavilion of the 50th edition of La Biennale di Venezia (2003) in Italy. Höfer was the recipient of the Outstanding Contribution to Photography award by the Sony World Photography Awards in April of 2018. Her works can be found in major collections including the Museum of Modern Art in New York, the Centre Pompidou in Paris, the Bibliothèque nationale de France, the Museum Ludwig in Cologne, the Moderna Museet in Stockholm, the Museo Centro de Arte Reina Sofia in Madrid, Museo Guggenheim Bilbao, the National Museum of Modern and Contemporary Art in Seoul, the Rubell Family Collection in Miami, and the Friedrich Christian Flick Foundation in Zürich. Candida Höfer currently resides and practices in Cologne. 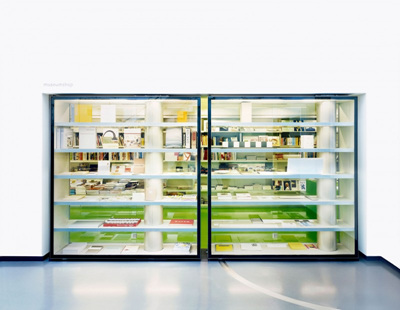 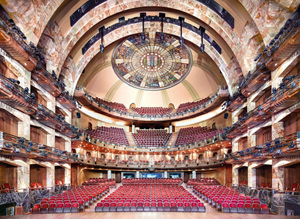 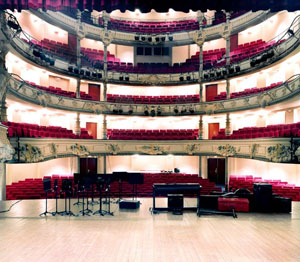 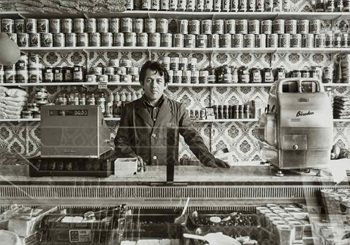 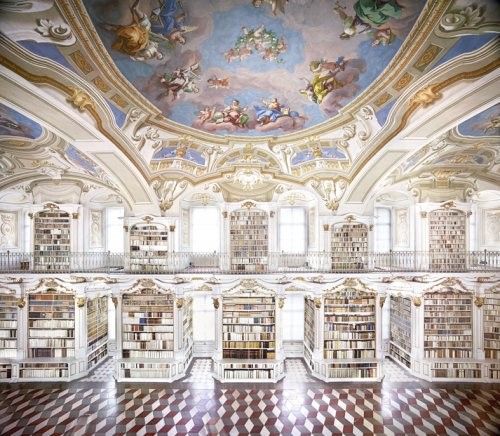